Definitions vary a bit, but re-performers (also known as “scratch-and-dent” loans) are generally considered loans in which the borrower missed at least one payment and has since gotten back to “current” status either to the original contract or to a new and permanent loan modification. Modifications are more common, which is the type of re-performer that needs a special approach. Many times the borrower may have lost their job or had personal/medical issues. They are reemployed or regain their health. They were a good risk and can become a good risk again. They still have an emotional attachment to their home. They do not want to move and just need a helping hand. This is in contrast to a nonperforming loan, in which the borrower has not made payments for over 90 days and has not resumed repayment of the loan.

To begin assessing how to maximize the value of a re-performer, it is important to understand certain key characteristics of the loan (essentially the quality of the modification itself), the property and of course, the borrower. Assessing the risk involved with a particular note is to understand what the history has been between the borrower and the lender; or, more specifically, between the borrower and the special servicer who is the entity that attempts to resolve non-performing loans on behalf of a lender. Managing modified loans, lenders and investors can do many things to increase their odds of having successful experiences with borrowers who have had a second chance after defaulting on their original home mortgage. Some lenders perform this function in house; others source it to third parties. Either way, the history between the borrower and the special servicer can provide you with valuable insight into what to expect with the borrower.

It is crucial to understand how the loan, the borrower and the property as all relate to each other. How much emotional equity does the borrower have in the property. Is the property maintained? Does the family have children and want to stay in the same school system? It is the inescapable loan-level uniqueness and complexity that makes it difficult to use one formula to manage all re-performers. Study the modification itself to identify critical items. Is it a HAMP loan? If so, how much will the payment increase and when? Changes in interest rates can have meaningful effects on payment amounts. These changes can be even more dangerous if a borrower’s employment or income situation is worsening or if local home prices in the same area are decreasing. The odds of the borrower defaulting again on a HAMP loan run as high as 65%. The odds of a borrower defaulting on a note that has been modified the payment, interest rate and/or principle to meet the current needs of the borrower are about 10%.

Maintaining a single point of contact for the borrower even when it is re-performing can pay dividends (literally).Recognizing this, the servicer should be able to customize how it positions its people, process and model for re-performers in order to improve performance. 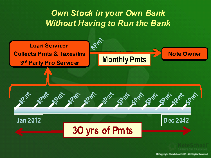 Therefore a vital aspect of managing re-performers is ensuring that there is perfect alignment of interests between the note owner and the servicer so that any potential conflicts are minimized or eliminated.

If you own a note, how is it serviced?

What are the headaches? How do I get paid?

Think of it as a passive income stream with a relatively high rate of return. The loan servicer is the point of contact for the borrower. The borrower pays the servicer the monthly payments. The servicer pays you a monthly check. 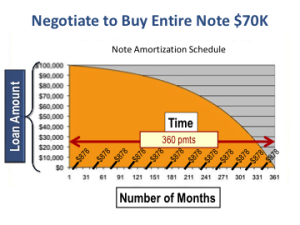 Given the number of modifications that have been done since 2008 and the lack of yield across the credit spectrum today, the opportunities and risks associated with the re-performing loan market deserve some attention. Once the current payment history is seasoned for 6-12 months, the re-performing note is as viable as a normal performing note with no late payments, but can be purchased at 60-70% of UPB(unpaid principal balance) verses 85% of UPB.

In this example, the investor bought a $100,000 re-performing note with 360 payments remaining for $70,000 and at maturity will receive $100,000 plus the interest. This result in a much higher ROI than just the interest rate of the note due to the 30$ discount at acquisition. 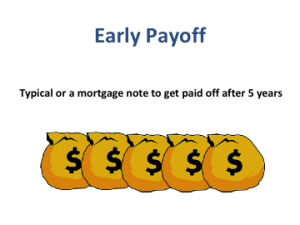 Return on your investment is the key to most people. Loans normally have a life cycle every 7 years. The borrower moves or refinances. The sooner the note is cashed out, the higher the yield for the investor. If the holding time is shortened, then the return on investment becomes greater. If the loan is paid off in 7 years, the investors yield will be significantly higher than the above fate of return.

A goal could be to create a portfolio of as many discounted notes at the best price we can get them and collect the cash flow and hope some homeowners are going to sell or refinance early before maturity. Some investments are going to settle, they’re going to close, so you’re not always going to have exactly the formula that you want. But you’re always going to get nice results. So understand that re-performers pay dividends, because you have many options for them.

WHAT IS THE MILLION DOLLAR QUESTION, AND DOES THIS SOUND GOOD?

What type of investment are you looking for? 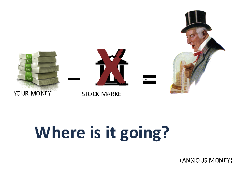 Where do you expect to get the best returns as an investor in this current market?

And, basically, does this sound good to you?

You have to either say yes, it does, or no it doesn’t, and either one is fine. But if you can answer these two questions to you, then you are headed in the right direction to invest in re-performing note.